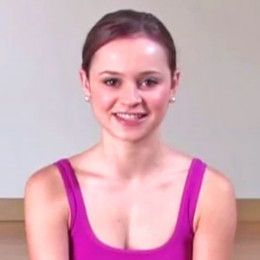 A figure skater, Sasha Cohen was born on 26th October 1984.She is well known for the 2006 Olympic silver medalist, three-time World Championship medalist as well as the 2003 Grand Prix Final Champion, and the 2006 U.S. Champion.

Sasha Cohen is a daughter of Galina, a former ballet dancer and  Roger Cohen.She graduated from Futures High School in Mission Viejo, California in 2002.

Sasha Cohen won the silver medal at the 2002 U.S. championships which help her earning her a trip to the Olympics.

She finished 4th at the 2002 World Championships, held in Nagano coached by John Nicks in California.

On 15th April 2006, Cohen announced that she intended to compete in the 2010 season and the 2010 Winter Olympics in Vancouver.

Sasha Cohen has done commercials for 'Citizen Watch', 'Simply Saline', and 'Got Milk?'.

She worked in the second season of 'Project Runway' in Episode 7 of the wherein designers were challenged to design a skating dress for her.

On 5th July 2015, Sasha Cohen engaged Tom May, a hedge fund manager. On 20th August 2016, the couple married in Cape Cod, Massachusetts. The couple met at a Harvard Business School party in 2014. She is the first skater to receive +3s for spirals under the IJS for "Grade of Execution". Sasha Cohen holds American nationality and belongs to white ethnicity. She has a net worth of around $10 million. Cohen stands 5 feet and 2 inches tall.

First Marriage with Tom May

On 5th July 2015, Sasha Cohen was engaged with Tom May, a hedge fund manager. On 20th August 2016, the couple married in Cape Cod, Massachusetts.