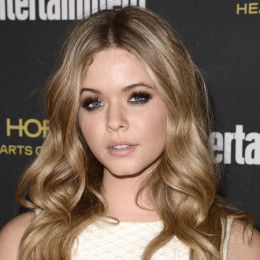 She is a TV actress, model, singer and songwriter, best known for playing on the hit ABC Family series Pretty Little Liars, as Alison DiLaurentis. Since 2010, she has been running her own jewelry line, called "Rigid Creations". She has appeared in numerous television commercials such as national spots for "Nesquick" and "Firestone Tires". She is the daughter of two professional dancers. She has been modelling and acting since age 4.

Talking about her personal life, she hasn't been married to anyone yet as she is just nineteen years old. As she is so pretty and charming guys fall for her in just a matter of seconds, but currently she is in a serious relationship with a guy who is 7 years older than her. The couple is often spotted together at various functions and places. She now lives in Los Angeles with her parents.