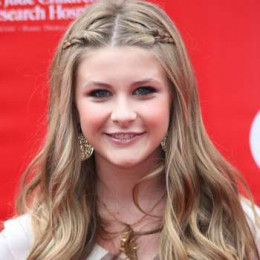 Savannah Outen is a singer, songwriter, and musician poised to make her mark on the mainstream pop music stage. She gained her popularity on YouTube by posting videos of herself singing in March 2007 along with Angelika Vee and Esmee Denters. She reached 19 million views on her YouTube account by 2008. She is the daughter of Barry Outen and Lisa Outen. She attended Century High School, but as of 2009 is homeschooled by her parents. She is a bit ahead and early graduated. At the age of 12, Outen made it to the finals of "America's Best New Talent". On may 31, 2008, Outen's first single, "Goodbyes" was featured on Radio Disney's music mailbag.

Outen being cute and adorable singer has got million of fans with her. Till today, she is not in a relationship with any boys. She was once rumored that she was dating Lucas Till. Then she cleared to the media that she was not in relation with this guy. Besides this, she is not linked with any guys. One will be too fortunate to date this girl in his life. To get in touch with her personal life follow her @therealsavannah on twitter.