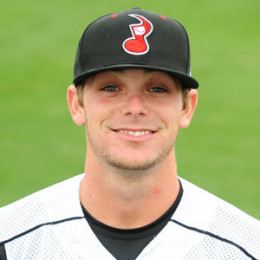 Ryan Joseph Gennett commonly known as "Scooter Gennett" is an American baseball second baseman for the Milwaukee Brewers of Major League Baseball. At the 2012 All-Star Futures Game, he represented the Brewers. While attending Sarasota High School in Florida, he played baseball and was selected by the Brewers in the 16th round of the 2009 MLB Draft. His father Joe was a scout with the Astros,

Talking about his sexuality, he is straight. He is Christian by religion. He is a married man. He is married to his high-school sweetheart. They got married in the cave below Milwaukee's Miller Brewery surrounded by limited people. He has stayed loyal towards his wife, as he has no extra affairs besides. They seem to have a great bonding and chemistry with one another so there is no sign of their divorce. The couple has no any child till date.

She is the high school girlfriend of Scooter. The two were married in the historic caves below Milwaukee's Miller Brewery.