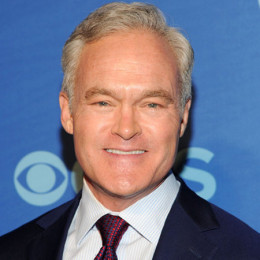 Scott Cameron Pelley is an American television journalist currently working for the CBS News as an editor and also known as the correspondent of the magazine called 60 minutes, CBS news. He majored in journalism from Texas Tech University. For his coverage of mass murder at Sandy Hook Elementary School, he was awarded with the Alfred I. Dupont Columbia University Award. His first job was a copyboy for the Lubbock Avalanche which he got at the age of fifteen.

Emmy Award winner, Scott Pelley was born as Scott Cameron Pelley on July 28, 1957, in San Antonio, Texas. He grew up in Lubbock with his parents.

He completed his graduation from Coronado High School and gained his first job in journalism at the age of 15 as a copyboy for the Lubbock Avalanche-Journal.  Later, he majored in journalism at Texas Tech University in Lubbock.

In 1975, Scott began his journalism career at Lubbock's KSEL-TV and later he moved on to  KXAS-TV in Fort Worth and then WFAA-TV. In 1989, he joined CBS and later from 1997 to 1999 he served as CBS News' Cheif White House Correspondent.

Pelly joined 60 Minutes II in 1999. He was one of the first reporters on the scene after the collapse of the Twin Towers on September 11, 2001. Even he covered the war report of Iraq. He became the anchor of the  CBS Evening News on June 6, 2011.

Scott Pelley is one of the most awarded media personality. Altogether he won 18 Emmy's for his outstanding performance and two Writers Guild Awards.

The now 59 years old, Scott is one of the highest paid journalists and his net worth is believed to be equal to $16 million. His salary per annum is $7 million.

Pelley is a married man, he tied a knot with Jane Boone Pelley in 1983. It was believed their wedding was an intimate ceremony which was held in the presence of their close ones.

The duo shared two children; son Reece and daughter Blair. They are together for 34 years and there aren't any rumors regarding their divorce or extramarital affairs.

She is a news reporter who once worked at KXAS in Dallas/Fort Worth. The couple have a son and a daughter.