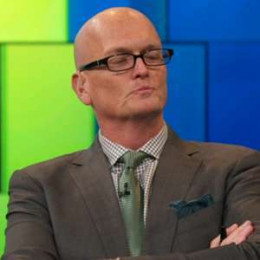 An American sportscaster and sports talk show host, Scott Van Pelt is currently married to Stephanie Van Pelt .The couple married in 2011.He is a son of Cathie Mathis and Sam Van Pelt. Scott graduated from Sherwood High School. He is a member of the Pi Kappa Alpha fraternity. He began his career at WTTG-TV as a sportscasting. Scott has worked for many channels .

Scott Van Pelt is a married person He is a solo anchor for SportsCenter .Scott has nominated for Sports Emmy Award in a category for Outstanding Sports Personality - Studio Host .There is no information about his affair in social sites. Scott is a studio presenter for Friday night College Football on ESPN college football games for the ESPN Network.

Scott Van Pelt is currently married to Stephanie Van Pelt .The couple married in 2011.There is no information about there children in social sites.