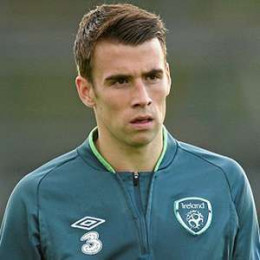 Seamus Coleman is a professional footballer. He plays as a right-back for Premier League club Everton and is captain of the Republic of Ireland national team.

Coleman is the son of Maire and Henry Coleman. He began his football career with amateur club St. Catherines in Killybegs before moving to Sligo Rovers and moving to English club Everton in 2009.

Coleman serves as a senior international for the Republic of Ireland since 2011 also acquiring over 40 caps. He won the 2011 Nations Cup and awarded the FAI Under-21 International Player of the Year in 2009 and 2010.
Coleman was selected for the Irish squad at UEFA Euro 2016, captaining Ireland against  Italy and France. In September 2016, he was named the new Ireland captain following Robbie Keane's international retirement.

Coleman was signed by the Merseyside club for £60,000 by following a recommendation by Willie McStay to former teammate and Everton manager David Moyes. He made his debut on 22nd October 2009 in the Europa League group stage in a 5–0 loss to Benfica at the Estadio da Luz. Moreover, on 19th March 2010, Coleman joined Championship club Blackpool on loan,  for one month as a replacement for the injured Neil Eardley.

On 24th March 2017, whilst playing against for Wales in a World Cup qualification match, Neil Taylor lunged at Coleman and left him on the ground. On 29th May 2013, Coleman was named 'Man of the Match' for his performance against England at Wembley Stadium. He scored his only goal for Rovers against Bray Wanderers on 17th May 2008, a 3–0 win.

Seamus Coleman married Rachel Cunningham in June 2015 at St. Mary of the Visitation Church in Killybegs.