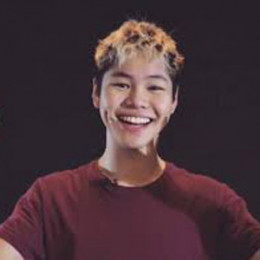 American dancer, choreographer, and cook, Sean Lew rose to fame after he participated in the reality talent show X-Factor. He is a member of LilBeasts, a dance crew that performs for various celebrities. He is also a cook an has won the 2017 cooking competition, Chopped Junior. Lew is possibly single these days. He is more focused on building his career as a dancer and choreographer.

Born in Walnut, CA, on November 25, 2001, Sean Lew is the only son of Chuck and Miya. Nationality-wise, he is American and belongs to Asian ethnicity(half Chinese and half Japanese). He has two sisters, Sarah and Serris. Among the two sisters, Serris is also a dancer and has performed many many times with Lew.

Lew developed an interest in dancing from a very young age and trained at the Mather Dance Studio. He joined YouTube in 2008 at the age of seven and uploaded many videos of him dancing in various competitions. As a kid, he participated in various dance competitions including Hall of Fame Dance Challenge, Star Power, State Challenge, Hollywood Dancesport Championship and Legacy Dance competition among others.

He gained popularity after his dance performance on Lady Gaga's Applause went viral. Since then Lew has just climbed higher in the ladder of success.

Following Sean Lew's viral dance performance, at the age of eight, he got to appear in the TV series Glee as a dancer, his debut in the acting field. In 2011, he went on to compete in X-Factor from where he rose to prominence.

In 2012, he participated in Kid's Choice Awards and in 2014, he was a contestant in the second season of Rachael VS Guy Kids Cook-Off. The same year he appeared in one episode of See Dad Run.

In 2015, he played a small part as a dancer in Breaking Through. The following year he played the character of Jono in Nicky, Ricky, Dicky & Dawn. He is the winner of Food Networks's cooking competition Chopped Junior. He is a member of the crew named LilBeasts.

As per Sean Lew's Instagram post, he is seen hanging out with many ladies but hasn't introduced anyone as his girlfriend. Lew is possibly single and focused on his career as a dancer and a choreographer. His favorite dance style is hip-hop and his least favorite style jazz.

In his leisure time, he loves to play basketball and play the piano. He loves the movie Step Up 3D and wishes to perform with the actors in that movie. His favorite food is anything cooked by his mother. He is also an animal lover and has a pet dog named Oreo.

Sean Lew has accumulated an estimated net worth of $200,000. However, it is not the official figure. His primary source of income is from doing dance shows and also winning many competitions. He also won $10,000 cash prize by winning Chopped Junior.

His self-titled YouTube channel adds more to his income. Each of his videos on YouTube has an average view of over 50k. He also has made appearances in TV series and movies, his other source of income.

Here is a video of Lew when he was 13 telling about his likes and dislikes.