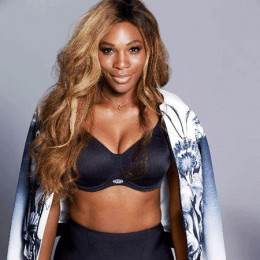 Serena Jameka Williams is a tennis player who is ranked No. 1 by the Women's Tennis Association (WTA) in women's singles tennis. In 2013, she became the oldest no. 1 player at the age of 31 years and 4 months. Till day her parents, Richard Williams and Oracene Williams are her coach. She is the recipient of Best Female Tennis Player (six times) and Best Female Athlete (two times). She is a certified Fashion Designer owning a clothing line named "Aneres".

Moving on to her personal life, she hasn't married yet but soon she is going to have a child. As she is popular and good looking, she has been on lots of dates and breakups. These days she is dating a handsome guy, Alexis Ohanian, with whom she is spotted quite often. Currently, she resides in Palm Beach, Florida, with her sister, Venus and two dogs.

She was raised in Saginaw, Michigan with her five siblings. Her nationality is American.

She was associated with tennis since the age of 3 when her family moved to Compton, California. Her father was her first coach who helped her to enroll in tennis.

Later she was shifted with her family to West Palm Beach, Florida, where she attended the Rick Macci's tennis academy. She succeeded to ranked number one in the category of  'under-10 players' in Florida.

Serena started her professional career at the age of 14 through the Bell Challenge though she doesn't win the competition but she collect a lifetime experience from there.

Her journey wasn't easy as it looks she face many ups and down in her career. She got her first victory at the Ameritech Cup Chicago. In 1998, she made her debut in Australia open.

William won her first mixed doubles titles at Wimbledon with her sister Venus. She was the second African-American woman to win a Grand Slam singles tournament. She won the gold medal along with her sister at the 2000 Sydney Olympics.She has o

She has won several titles over her tennis career. Besides, tennis she involved in many off-court activities such as; Equipment and endorsements, Fashion, Language fluency, Miami Dolphins venture, writing, and charity works.

Serene is romantically involved with Reddit co-founder Alexis Ohanian. On December 29, 2016, she announced her engagement with him.

Serene and her fiance Alexis is expecting their first child. She announced her pregnancy by posting her picture on snap chat by focusing on her belly and she captioned the picture "20 weeks".

She gets pregnant when she won the Australian Open in January 2017. According to an insider, William will miss all her matches in 2017 and try to come back in 2018.

According to Forbes, her estimated net worth is $150 million. She is one of the world’s highest-paid athletes. She has also earned her lucrative endorsement deals with companies including Nike and Wilson.