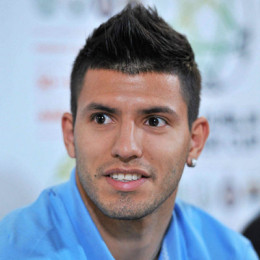 Sergio Leonel Agüero Del Castillo professionally known as Sergio Agüero is a skilled football player who plays for Manchester City and the national football team of Argentina as a striker. On 5 July 2003, he broke the record of Diego Maradona being the youngest player to debut in the Argentine Primera División at the age of fifteen. He was born in a large family of seven children where he was the second child. His father, Leonel was a taxi driver and mother, Adriana was a housewife.

He is the second child among seven children of his parents. All of his siblings including Yesica, Gabriela, Maira, Daiana, Mauritius, and Gaston took their father's last name but Aguero took his mother's last name.

Growing up in Buenos Aires, he played football at a young age and often used to play on the local ground in Villa Itali. Aguero once said the best place to learn football was on the streets and it helped him a lot to develop as a player.

At the age of nine, he joined the youth system of Independiente. At the age of 15, he made senior team debut on July 5, 2003, for Independiente against Club Atletico San Lorenzo de Almagro making him the youngest player to debut in the division. He came as a 69th-minute substitute for Emanuel Rivas. Following his debut, he did not play any game and was replaced by Osvaldo Sosa for the remaining games of 2002-03 season.

He got a spot in the first team after the arrival of new coach Jose Omar Pastoriza in a match against Cienciano in the group stage of the 2004 Copa Libertadores which made him the youngest player to participate in the tournament. He held that record for three years. On November 26, 2004, he scored his first goal for the club against Estudiantes. During his spell at Independiente, he played a total of 54 games netting 23 goals.

On May 30, 2006. Aguero transferred to Atletico Madrid for €20 million, a record-breaking fee for the club. On September 17, 2006, he scored his first goal for the club against Athletic Bilbao. His second goal against Recreativo de Huelva came to controversy as he used his hands to score. After the transfer of then striker Fernando Torres, Aguero became the first choice striker and later in the year established himself as a key player in the team. He ended 2007-08 season as the third highest scorer in La Liga with 19 goals. His crucial goals against Valencia, Villarreal, Real Madrid and Sevilla helped Atletico Madrid secure a spot to play in the qualifying matches for the UEFA Champions leagues.

The 2010-11 season was the best season for Aguero as he scored a total of 20 league goals, first of his career. He also scored his first hat-trick in a match against Mallorca which and his second goal of the hat-trick marked his 100th goal for Atletico Madrid. During his contract with Atletico, he appeared in 175 games netting an impressive 143 goals.

On July 28, 2011, he signed a five-year contract with English Premier League club Manchester City for a fee reported to be around €45 million. He debuted for the club on August 15, 2011, against Swansea City coming on as a substitute in the 59th minute. After just nine minutes of coming in, he scored his first goal and also provided David Silva with an assist. In the injury time, he again scored ending the match in a 4-0 win for City.

Aguero recorded his first hat-trick in the Premier League against Wigan Athletic. On October 1, 2011, Aguero suffered an injury and was substituted in the 28th minute. He returned to play in the 2011-12 UEFA Champions League in a match against Villarreal. He came as a 62nd-minute substitute and scored the winning goal for his club in the 93rd minute. He was shortlisted for the Ballon d'Or on November 1, 2011.

Aguero debuted in the League Cup in the quarter-final match against Arsenal in which his sole goal led City to win the match. He then scored in a game against Norwich City which they won 5-1.

His scored his first Europa League goal for City in the first-leg match against Porto coming in as a 78th-minute substitute. In the second-leg, he scored in just 19 seconds of the game.

On May 4, 2012, he was awarded Manchester City Player of the Year and won the Goal of the Season award for his first goal against Norwich in their 6-1 victory.

Aguero played a crucial role in City's final game of the season against QPR leading his team to win the Premier League title. He scored the winning goal for City in the 94th minute seeing the title.

The City striker extended his contract with the club on August 14, 2017, signing a five-year contract. He won the Premier League Golden Boot after the end of 2014-15 season. At the beginning of the 2015-16 season, he changed his shirt number from 16 to 10 which was previously won by Edin Dzeko.

In the 2017-18 season, Aguero maintained his good form scoring in just about every game. His second goal of the season playing against Liverpool marked his 124th goal of Premier League, made him the top-scoring non-European in the EPL history. A week later Aguero again worked his tricks scoring the sixth hat-trick of the Premier League in a 6-0 victory against Watford.

His second hat-trick of the season came against Newcastle on January 20, 2018. his second goal in that match was the 350th goal of his career. He won the Premier League Player of the Month for January, his fifth time winning the award.

On February 10, 2018, he scored his third hat-trick against Leicester City and in total he scored four goals in the match. He opened the scoreline for City in the 2018 EFL Cup Final against Arsenal which ended 3-0 in favor of City.

Aguero debuted for his country playing for Argentina U17 team and played in the 2004 U-16 South American Championship. In the group stage match, he scored a goal against the United States and Ecuador which helped Argentina to top the group. In the quarterfinals, Aguero scored the soled goal against Peru. Later in the finals against Colombia Argentina lost 2-0.
He also represented Argentina in two FIFA Youth Championships, both times his team won the title. He was also part of the 2007 FIFA U20 World Cup team in which he scored twice against Panama and one against North Korea. In the round of 16, he netted two goals against Poland.
Argentina faced the Czech Republic in the finals in which Aguero captained his side. He scored the equalizer in the 62nd minute which helped Argentina to win 2-1 eventually. Also, he won the Golden Boot for his six goals and the Golden Ball being the best performer in the tournament.
Aguero was also part of Argentina's 2008 Beijing Olympics squad. He found the net twice in the semifinals against Brazil and eventually went on to win the finals as well winning their second consecutive gold medal at the Olympics.
Aguero made his senior team debut at the age of 18 in a friendly against Brazil. His first international goal came a year later against Bolivia in a 2010 FIFA World Cup qualification. Later, her netter three more goals to lead Argentina for the finals in South Africa.

His first World Cup appearance was on June 12, 2010, against South Korea in the second group match. He came in as a 75th-minute substitute, and in few minutes of his entry, he scored and also provided an assist to Gonzalo Higuain, his hat-trick goal.

He also represented Argentina in the 2011 Copa America and 2014 FIFA World Cup. His first international hat-trick came on June 7, 2015, against Bolivia.

In May 2018, Aguero was named in the final 23-man squad for the FIFA World Cup 2018 in Russia. In their first group match against Iceland, he scored the opening goal, his first World Cup goal. The game ended in a 1-1 draw.

The star striker of Argentina and Manchester City, Sergio Aguero has accumulated an impressive net worth of $71 million. He earns an annual salary of $18 million. His weekly salary is $275k. As of 2018, his market value is $93 million.

Aguero also makes a good sum from his endorsement deal with Puma which is estimated at $7 million. Other than that he earns from his personal investment which is assumed to be $49 million.

He is living a lavish life and currently resides in his $2.83 million designer house in Stretford, Manchester. He is an avid car lover and has got quite a collection which includes BMW, Audi, and a Lamborgini Aventador coupe. The total cost of all the car is around $2.8 million

He was once married to the beloved daughter of Argentine football legend Diego Maradona. The pair tied the knot in 2008 and after four years of togetherness, they divorced in 2013.

The exact reason for the split is not public. The pair share a child named Benjamin born on February 19, 2009, in Madrid. He tattooed his son's name and date of birth in his left arm. In his right arm, he has inked Kun Aguero in Latin.

Aguero then went on to date Argentine singer, Karina Tejeda popular as The Little Princess in her native country. They started dating in 2013. After four years of relationship, the pair broke up. It was Tejeda who called off their relationship after Aguero attended a party in Argentina despite she told her not to go.

Aguero is a Spanish citizen as of 2010 after being granted citizenship while playing for Atletico Madrid.

He shares a good relationship with fellow Argentine player Lionel Messi. Aguero and Messi were roommates since 2005 during their outings playing for Argentina.

Aguero is currently dating the daughter of retired journeyman footballer Ashley Ward. News about his romantic life with Taylor flashed in the media earlier in March 2019. The couple first met on a night out.

She is his longtime girlfriend who is from his hometown. The two got married later on.