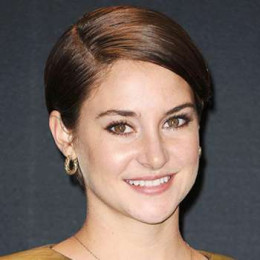 Shailene Woodley is an American actress who is known for portraying Hazel Grace Lancaster in the movie "The Fault in our Stars'. She is regarded as one of the most acclaimed young stars who is moving forth with the unique persona and features in the movie industry. She is the daughter of Lori Woodley and Loni Woodley. When she was 15 years, she was diagnosed with scoliosis which made her have chest to hip plastic hip to prevent from her spine from further curving. She has a younger brother. She had attended Simi Valley High School.

There was a rumor about Shailene and her insurgent co-star Theo James to be dating but since no absolute proof was found on it, it came out as an airy one. However, she is currenly in a relationship. Her current boyfreind is a musician. Prior to this relationship, she has dated a man but later broke up due to some issuses. She has been romantically linked to her co-stars many times.