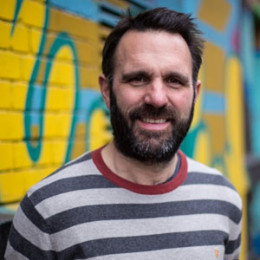 Shaun Keaveny is a British broadcaster, well known for his appearance as the presenter for the breakfast show on digital radio station BBC Radio 6 Music. Shaun is married to his longtime girlfriend Lucy Irving.

Shaun Keaveny was born on 14 June 1972 in the Leigh United Kingdom. He is white in ethnicity and holds British nationality.

He was born to his father Dunnhy, a music shop owner and mother Beth who was a gardener and health instructor. Keaveny has two younger brothers.

In his early age, Shaun was interested in playing the drums and used to play it at his father's shop every time he got a chance, from where he learned about different types of music. He attended St. Bernard's High School.

During his teenage, Shaun joined the student band 'Mosque.' He joined the group in 1987 and he worked with them till 1993. In the year 2000, he was associated with BBC.

There, Keaveny fronted the Good Morning Britain Breakfast show. After few months he began presenting the weekday afternoon show. He presented Friday Breakfast show till the end of 2006.

He is also a writer and published his first book at the end of 2010.

Shaun Keaveny is married to his longtime girlfriend Lucy Irving, they officially became husband-wife on 2009. Since then they are living as a happily married couple.

It has been more than a decade and the pair still doesn't have any children.

Keaveny earns a decent amount of money from his successful career, as his total net worth is estimated to be $ 4.5 million.