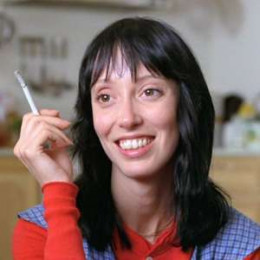 Shelley Duvall is a comedian,singer ,writer ,producer, and actress.She began her career from the movie Brewster McCloud,McCabe.She is the daughter of Bobbie Ruth and Robert Richardson "Bobby" Duvall.Her father was a lawyer.He has three brothers they are Scott, Shane, and Stewart.Her mother is a Massengale .She has wide eyes with the toothy smile and lanky figure.She has acted in many films.

She is a married person.She has married with Bernard Sampson in 1970 and got divorced in 1974.She has played in Faerie Tale Theatre and The Shining.She has worn Festival Award for Best Actress from her movie 3 Women .Her husband was an artist.There is a rumor that she had dated with Paul Simon,singer, and songwriter,they lived for two years together.

Her husband was an artist Bernard Sampson.They got married on 1970 and this couple divorced on1974.