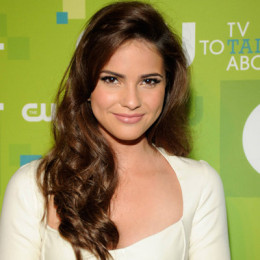 An American actress who is a winner of beauty pageant title holder has played in various American TV series like the CW series "The Secret Circle" and currently playing the character of Malia Tate in Teen Wolf. She completed her high-school from Destrehan High School and was nominated twice in Daytime Emmy Awards for the Outstanding Younger Actress In A Drama Series.

Shelley Catherine Hennig was born on January 2, 1987, to parents Cathy Distefano Gosset and Glenn H. Henning. Sr in St. Rose, Louisiana and later moved to Destrehan, Louisiana.  She had two brothers, but one of them sadly passed away three years before Hennig won the Miss Teen USA. He was killed in a drunk-driving accident, and since then Hennig has been an advocate against underage drinking. She has worked with local Louisiana non-profit organization called Council on Alcohol and Drug Abuse (C.A.D.A).

Shelley studied at Destrehan High School, where she was named “Academic Excellent Student.” She is also a dancer and has won many dancing competition and also enjoys poetry and writing. Two of her poems have been published in the Young Authors Book of Poetry.

At a very young age, she entered the beauty pageant, Miss. Louisiana Teen USA which was held in Lafayette, Louisiana, in November 2003 and won the competition. Later in August of 2004, she represented her home state in the Miss Teen USA 2004 pageant held in Palm Spring, California. She went on and won the competition, becoming the first winner from Louisiana and the first girl from Louisiana to win a national title since 1996.

Her crown gained her a one-year modeling contract with Trump Modeling Management and a scholarship to the New York Conservatory for Dramatic Arts.

After winning Miss Teen USA, Hennig went on to represent the USA in Miss Universe Organization. During that period she appeared on a lot of TV shows and even made an appearance in the NBC soap opera Passions which was part of her prize package. She has also worked with many other non-profit organizations, including Seeds of Peace, D.A.R.E, Sparrow Clubs, and SHINE.  Her reign as Miss Teen USA ended in 2005.

Shelley was first introduced to the world of entertainment when she won the Miss Teen USA title in 2004, and since then she has been in the limelight. Soon after her reign ended, Hennig participated on MTV’s The Reality Show where they competed against each other for a chance to win their own show, but she was eliminated. On August 16, 2008, she hosted the, Miss. Teen USA pageant with Seth Goldman.

Shelley started her acting career in 2007, when she joined the cast of Days of Our Lives, where she played the role of Stephanie Johnson.  She was nominated for her brilliant work in that show. In 2010, she received her first nomination for the 37th Daytime Emmy Awards in the Outstanding Younger Actress in a Drama Series category and was again nominated in 2012. She left the show on January 18, 2011 after 4 years of playing Stephanie.

After she left the show, in 2011 she was casted in the lead role as Diana Meade in the TV series The Secret Circle. The series was based on the books written by L.J Smith. But the show was cancelled after only one season on 11th May, 2012.  Shelley also appeared in the series Zach Stone Is Gonna Be Famous where she played the role of Christy, but sadly the show also got cancelled after one season on June 23, 2013.

Hennig was also on MTV’s hit series ‘Teen Wolf’ where she plays the character of Malia Tate. She performed on the show as a recurring character in Season 3 and by the end of the season it was announced that Malia will be a series regular from Season 4.

She has also guest starred in many other shows such as ‘Blue Blood’, ‘Friends with Better Lives.’ Currently she has been signed for a new TV series called ‘Liberty Crossing’ where she’ll be playing the major role as Carly Ambrose.

Shelley has also worked in many movies and has appeared in many music videos as well. In 2014 she acted in two horror movies called, ‘Ouija’ and ‘Unfriended.’ She also appeared on the Band Perry’s music video for ‘Gentle on My mind’ alongside the Hunger Games actor Alexander Ludwig and in a music video by Maren Morris for ‘I Could Use a Love Song.’

In 2007 Shelley dated Jay Kenneth Johnson, but the relation ended in 2012 after six years of being together. Also in the same year it was rumored that she was dating Thomas Dekker.

She was also linked with Ben McKenzie in 2013 and with her teen wolf co-star Dylan O’Brien in 2014. But at that time O’Brien was already in a relation with Hennig’s friend and previous co-star Britt Robertson. The rumors was dismissed soon after claiming Shelley and Dylan are just good friends.

Currently there are no rumors about her dating anyone so it can be assumed that she is single .

Shelley earns big bucks from her acting and modeling career and her estimated net worth is around $ 1 million and we are sure that it will increase in the near future.