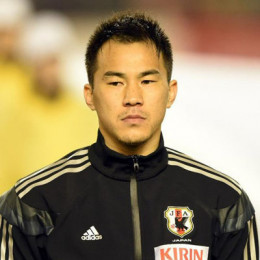 Shinji Okazaki is a professional Japanese football player who plays in the German Bundesliga and for the Japan national football team as a forward. Through Takigawa Daini High School he started his youth football career. After graduating high school he was signed on full professional terms by Shimizu S-Pulse in 2005. He has scored 35 international goals which made him Japan’s fourth highest goal scorer ever. He joined Japanese national team in 2008.

Shinji Okazaki was born on April 16, 1986, in Takarazuka, Hyogo, Japan. He started playing football while still a kid, and with age, his love for the game grew stronger.

Okazaki attended Takigawa Daini High School where he was part of the school's football team. He served the team for three years before graduating in 2004 after which he signed his first professional contract with Shimizu S-Pulse in 2005.

He debuted for the club in December 2005 as a substitute playing against Sanfrecce Hiroshima. His first goal for the club came on April 15, 2007, against Kawasaki Frontale. His first season for the club ended with three goals in 13 matches.

In the 2008 J. League season, he appeared in a total of 27 matches netting ten goals. He continued his good goalscoring form in the 2009 and 2010 season as well.

Okazaki joined the German club VfB Stuttgart on January 30, 2011, signing a three and half year contract. He debuted for the club playing against Benfica in the European League. His first appearance in Bundesliga was against Bayer 04 Leverkusen, and the first goal was against Hannover 96.

He won the Goal of the Month for scoring with a bicycle kick against Hannover 96, becoming the second Japanese player after Yasuhiko Okudera to win the award in Germany.

Okazaki joined FSV Mainz 05 on July 1, 2013. On his debut match against his former club Stuttgart, he scored his first goal for Mainz. He played a total of 65 games for Mainz netting 27 goals in all competitions.

Leicester City signed Okazaki on June 26, 2015, for a fee reported to be around £7 million. He played the first match for Leicester City on August 8, 2015, against Sunderland and netted his first goal a week later against West Ham. Leicester won the Premier League title in 2016 making Okazaki the second player after Shinji Kagawa to win the EPL. He won the Asian Internationa Player of the Year for his performance in the 2015-16 season.

As of 2018, Okazaki appeared in 93 matches for Leicester netting 14 goals.

Shinji Okazaki made international debut playing for Japan U23 side competing in the 2008 Olympic Games in China. His first game representing his country was against the United Arab Emirates. Okazaki netted the first goal for Japan on January 20, 2009, in the opening match of 2011 AFC Asian Cup qualifier against Yemen.

In October 2009, he scored back to back hat-tricks against Hong Kong and Togo. With his 15 goals in 2009, he was awarded the title of The World's Top Goal Scorer by the IFFHS.

At the 2011 AFC Asian Cup, he scored his third hat-trick against Saudi Arabia and eventually went on to win the title for the fourth time defeating Australia in the finals. He scored 8 goals in the 2014 FIFA World Cup making him the highest scorer in the Asian section.

He is part of the 2018 FIFA World Cup squad of Japan. As of 2018, with 50 goals to his name, Okazaki is the top active national team goalscorer and third overall in the team's history.

Shinji Okazaki earned an impressive net worth playing football which is estimated to be around $9.2 million, however, the exact figure is not public. He earns £60,000($78,456) weekly wage playing for Leicester City which totals to $941,472. Apart from that he also makes a decent sum from his endorsement deal with Mizuno.

His romantic life related to his girlfriend, marital relationship and other are not available anywhere. He has kept his personal life away from media so we actually can't say if he is single or married or divorced.

Currently, he resides in Leicester, England. Okazaki is active on Twitter and has around 200k followers.