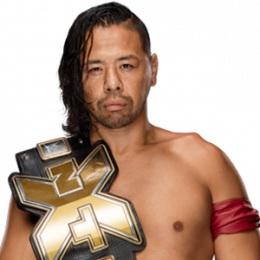 A professional wrestler and former mixed martial artist, Shinsuke Nakamura is currently signed to WWE competing in their developmental territory NXT, where he is a former two-time NXT Champion.

In 2002, Nakamura signed with NJPW and began to be known as the ‘super rookie’. He's been an NJPW legend ever since Shinsuke joined the promotion at the age of 22 years old.

Nakamura made his fifth video game appearance as a downloadable character in WWE 2K17. On 8th March 2017, he defeated T.J. Perkins and was put into a rematch to face Bobby Roode for the NXT Championship at NXT TakeOver: Orlando.

Shinsuke Nakamura was born on February 24, 1980, who holds Japanese nationality and belongs to the Asian ethnicity. Presently, he resides in Orlando, Florida, U.S. He is also known as the former mixed martial artist currently signed to WWE, performing on the SmackDown brand.

He became best known for his time in the New Japan Pro Wrestling league where he won three IWGP Heavyweight Championships, five IWGP Intercontinental Championships, and one IWGP Tag Team Championship. He first joined the league in 2002.

Shinsuke Nakamura began his professional wrestling career on 29th August 2002 by joining NJPW where he earned a nickname of ‘super Rookie’. There he was trained in Vale tudo. The Same year, he made his debut in mixed martial arts.

On 11th December 2004, he won the IWGP Tag Team Championship along with his team partner Hiroshi Tanahashi.  Shinsuke Nakamura returned to the New Japan on 2006 and joined Masahiro Chono’s Black stable. In 2009, he turned heel, by siding with the former members of GBH. The newly formed group was named Chaos as Shinsuke as the leader of the group.

Then he began to work using a lot of knees. He also continued to use his right hand in addition to the Bombay. Because of the move, Hiroshi Tanahashi's orbital bone got fractured in IWGO Heavyweight Champion.

WWE officially announced that Shinsuke Nakamura will be taking part in NXT TakeOver: Dallas which will hold on 1st April 2016. To undergo the pre-contract signing medical test he arrived at Pittsburgh, Pennsylvania on 2nd February. On 22nd February, he was signed to NXT.

Besides his wrestling, Shinsuke Nakamura is also featured in a Japanese music video entitled ‘Happy’ along with NJPW wrestler Kazuchika Okada. The video was directed by a fashion designer DJ.  The video was released on 2014 May. WWE announced Shinsuke Nakamura segment on Smackdown Live where he would face Dolph Ziggler in May 2017.

Shinsuke Nakamura has earned an impressive net worth of $3.5 million from his wrestling matches. He has also appeared in several movies and music videos which are a crucial factor to his net worth.

Shinsuke is a married man, he tied a knot with his longtime girlfriend, Harumi Maekawa in 1st September 2007. Their wedding was held in Tokyo and believed in a  grand ceremony. The couple has no children. They are together since ten years and there is no rumors of their splits and divorce.