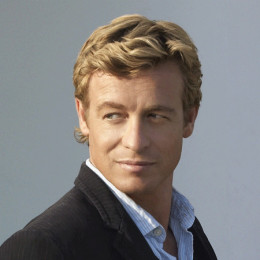 Simon Baker is an actor and director, best known for his role as Patrick Jane in the CBS television series "The Mentalist" and as Riley Denbo in "Land of the Dead" and as Christian Thompson in the film "The Devil Wears Prada". He is the son of Elizabeth Labberton, a high school teacher and Barry Baker, a mechanic. On 14 Feb 2013, he earned a star on the Hollywood Walk of Fame at 6352 Hollywood Boulevard.

Simon Baker is a happily married man. He has been enjoying his marital relationship with his longterm partner with whom he shares three children.

Simon Baker is married to his wife, Rebecca Rig since 2 October 1998. His wife is an Australian actress, whom he first met in 1991 on a blind date at the Royal Hotel in Sydney's Paddington.

The pair turned a boyfriend-girlfriend relationship into holy matrimony after dating for about five years. Baker and Rig are parents of three children: two sons and a daughter. Currently, the family of five lives in Malibu, California.

The 5 ft 10 in tall actor has an estimated net worth of $45 million. He receives a salary of $350 thousand per episode for starring in television series. Speaking of his earnings from The Mentalist, Baker was earning US$350 per episode.

Soon after that, he signed a contract that delivers a payment of US$30 million for his character as Patrick Jane. All in all, he has been a Longines Ambassador of Elegance and featured in "Elegance is an attitude" advertising campaign which was shot in Chantilly Racecourse.

Besides, their magazine print campaign for the same slogan was shot by the Le Studio Productions, SA. He fronted Samsung Electronics Australia's Turn on Tomorrow campaign displaying as announced in July 2010.

Simon and Rebecca are now the owners of three luxurious properties across the country including a Bondi Beach apartment and a quaint farm in Byron Bay.

She is the first and the only wife of Baker, who by profession is an actress. The couple has been together since 1991.

She is the first and only daughter born to Baker and his wife.

He is the second child of Baker and his wife, who was born safe and sound.

He is the youngest member in the house, who was born healthy.