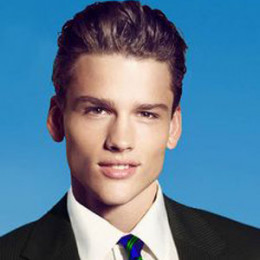 Discovered in 2006, Simon Nessman pursued modeling only after graduation. He was a good basketball player during his high school and he had pretty good aspiration in basketball career too. He has established himself as a successful model. Known best as the current face for Giorgio Armani, he has featured in numbers of ad campaigns for various other popular fashion names. He was also ranked as second most successful male model in 2011. In 2013, he was listed third by Forbes in the list of highest paid male model.

Simon has been reported single currently. However, he had been into numbers of affairs previously. Also ranked as one of the sexiest male models of the current generation, he is subject for the fantasy of lots of females.

It was an honour and a privilege to walk in Ralph Lauren's 50th anniversary runway show in New York last night. @poloralphlauren @soulartistmgmt #nyfw #ralphlauren #empire

He has not been into rumors though. He is dedicated to his work and is striving for success ahead. He still has much to work in but is well directed towards his job roles.

He has also been featured in the list of Top Icons Men, The Money Guys, and Sexiest Men.

Simon Nessman was born on 5 November 1989 in Courtenay, British Columbia. He belongs to half Scottish and half Austrian descent.

He is best known as the current face of Giorgio Armani. Also, he was featured in many ads campaigns including Calvin Klein, Ralph Lauren, John Galliano, and Lanvin.