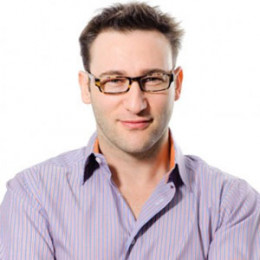 Simon Sinek is an American author and a marketing consultant. He is also an author of the four books which include the bestseller Start With Why: How Great Leaders Inspire Everyone to Take Action.

The brilliant author was born on October 9, 1973, in Wimbledon, England to Steve Sinek and Susan Sinek. He holds English nationality and belongs to Caucasian ethnicity. He spent his childhood days with his sister.

When he was a child he resided in London and Hong Kong before settling down in the United States. He attended Northern Valley Regional High School at Demarest.

My sister's is in search of the perfect work/mom balance. All you moms, check out her new blog http://tinyurl.com/36qv8zx

Then he studied Law at London’s City University and received a BA in cultural anthropology from Brandies University.

The talented author and a marketing consultant began his career at the New York ad agencies titled Euro RSCG and Ogilvy & Mather. Later on, he launched his own business with his partners.

Riding bikes around Apple Park with the always inspiring and incredibly brilliant @angelaahrendts. Angela is one of my favorite leaders. She gets it. She puts people first and the results take care of themselves. #greatleader #biketowork #apple #leader #bikeselfie @apple

Then he published his second book entitled Leaders Eat Last: Why Some Teams Pull Together and Others Don’t which made it on the best sellers lists of the Wall Street Journal and The New York Times.

Sinek then published his third book named Together Is Better: A Little Book of Inspiration. Then his fourth, Find Your Why: A Practical Guide for Discovering Purpose for You. His latest Your Team is due to be published in September 2017.

The 45-years-old author's personal life is overshadowed by his professional career.

He has shown great professionalism and has maintained secrecy regarding his affairs and relationship status. Whether he is single, has a girlfriend or married is still a matter of curiosity.

Marketing is like dating, it's a way to build a relationship with someone. Like any strong relationship, when done well, it takes time

While his relationship status and details about his girlfriend is still a mystery, he stated his views regarding dating life via Twitter in July 2012.

In an interview below, talked about how the relationship changes along with time:

Well, he may update about his personal life sometime in future.

Simon’s net worth has not been revealed yet but looking at his successful career as an author and a marketing consultant, his net worth is estimated around $1 million.