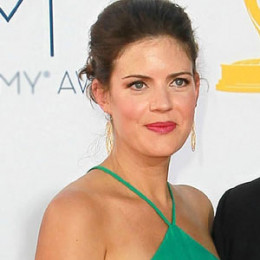 Siri Pinter was born on February 4, 1981, in Los Angelos, California, United States of America. She is the Daughter of Mark Pinter.

Siri Pinter is a married woman. She is married to her long-time boyfriend (10 years of relationship) Carson Daly, a radio personality, television host, producer, and television personality.

Families come in all shapes and sizes... but all you need is love. This happened yesterday and it was the best day of my life. Merry Christmas Eve from my family to yours! : by the amazing @peetigga #jcrewwedding

The couple got married on 23rd December 2015, following two-year-long engagement.

Dear lord, the elves have multiplied. We think Buddy ran to the North Pole and grabbed his wife to celebrate our anniversary. Happy 3 Years, @carsondaly... does this elf thing count as your present

The couple celebrated Christmas in 2018. Also, the pair celebrated three years of marriage anniversary and shared their happiness via Instagram post.

Siri Pinter earns a decent amount of money from her film producing career, as she produced numerous movies and TV series, also worked as a crew.

Her current net worth is estimated be in millions. Whereas, her husband Carson Daly has a total net worth of $ 15 million.

Siri Printer is married to the famous American TV personality Carson Daly, and the couple has three beautiful children together.

Jackson James Daly is the first son of Siri Pinter and Carson Daly.

Etta Jones Daly is the second child and the first daughter of Siri Printer and Carson Daly.

London Rose Daly is the third child and the second daughter to Siri Pinter and Carson Daly.