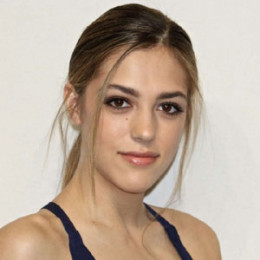 Sistine Stallone had a very stunning debut on the runway during London Fashion Week on February 19 for the Topshop show. She along with her sisters including Sophia and Scarlet were chosen to share the responsibility of Miss Golden Globe in 2017. In May 2017, the three sisters were the cover stars of Harper by Harper’s Bazaar magazine. She's well known for being Sylvester Stallone's daughter.

She is the daughter of Sylvester Stallone and Jennifer Flavin. Her father Sylvester Stallone is an actor, filmmaker, and screenwriter well known for his Hollywood action roles, including boxer Rocky Balboa, the title character of the Rocky series' seven films from 1976 to 2015.

Her mother Jennifer Flavin is a former American model and current entrepreneur and business owner.

Sistine graduated from Notre Dame High School in California over the weekend.

Sistine Stallone along with her sisters has been in the spotlight recently after she and her sisters served as joint Miss Golden Globes at this year’s ceremony.

The Hollywood Foreign Press Association that run the Golden Globes decided that she along with her two sisters were the perfect representatives to be Miss Golden Globe stars for 2017.

She has tested herself as an actress so far and has a small speaking role in the flop 2014 film Reach Me.

Sistine signed to IMG model and has appeared in the pages of Teen Vogue, Harper’s Bazaar, and Town & Country. Many critics are claiming she might become one of the biggest supermodels out there.

Sistine is following in the footstep of elite models like Gigi Hadid and Kendall Jenner. As her mother was a model as well, she was the one who convinced Sistine to stay in the profession.

When Sistine went for her first photo shoot, she absolutely hated it and didn't want to be a part of it. But it was Jennifer who asked her to be patient and give it another go.

Sistine Stallone walked in Chanel’s annual Métiers d’Art show, and Vogue magazine named her one of fashion’s fresh faces to watch out. The beautiful model also appeared as part of Love‘s advent calendar, looking stunning posing and strutting in black, lacy unmentionables for a new video.

She has an active Instagram account where she shares snapshots of her exotic life with sun-drenched environments and ocean views routinely uploaded. Although she has been in the spotlight from an early age, she has managed to keep her personal life secret.

The gorgeous model is still young and is focusing on building her career, so marriage is at the back of the burner for her. She is apparently single and is not looking for a boyfriend.

Talking about her nationality, Sistine Stallone is American and belongs to white ethnicity. Her father, Stallone's films, has made nearly $2 billion at the box office and her father has a net worth as of May 2017 was $400 million.