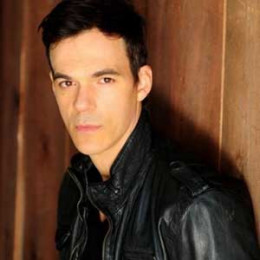 The Australian actor, Socratis Otto is a Hollywood actor best known for his television series Young Lions. The audiences highly appreciate Socratis's work. The fans loved his character as transgender.

The theater artist, Socratis was born on 1st January 1970 in Sydney, Australia. He is the first son of his parents who were immigrants from Greece. He is an Australian and belongs to white ethnicity.

Me in 3rd or 4th grade I think. I used to hate this photo. We never had social media back then, the internet was alien and texting wasn’t an option - we had no choice but to speak to one another face to face or over the telephone. Copped much flak for how ugly I was, quiet and weird, lanky and tall..a weirdo, told to disappear, often last in school yard picks, receiver of insults, gob attacks, pelleted by rocks, stopped going to school coz my friends forbid the entire school to talk to me no joke - I was made invisible. Twisted how being bullied, loneliness, praying for any out can lead you to discerning speckles of gold in the cracks. Hard as fuck to keep on but I somehow withstood a lot and learnt a shitload of good about myself. I look at this picture now and think wow what a beautiful kid. Look at his cheek and smile. We gotta stop apologising for who we are and celebrate ourselves more. It’s one life kids. Real confidence and love for the self is easy, many who fear themselves will steer you from it. Call it patience compassion recognition, busting open judgement and celebrating yourself as well as others is pretty liberating. It shouldn’t be a competition - who’s got time for that? As soon as we accept and love ourselves, we start to fully live. Sweet air. Sunshine in the storm. That’s all we need. Anyway my little #thursdaythrowback spiel. But really every day spiel. All we got is ourselves. And tell your kids they’re awesome. There’s a big chance they may turn out happy.

The star completed the degree in creative writing and literature. After that Otto graduated from Australian NIDA (National Institute of Dramatic Art) in acting in 2000.

Right from 2001, Socratis took the first step towards his career. He acted in the Sydney Theatre Company in a play named, Salt. After that in the same year, he also worked in the Australian television series titled, Outsiders and played a guest role.

Otto played the main role in Young Lions as Justin Carmody. The series ran for a season with 22 episodes. He also worked as various characters in various TV series like- Robert Robertson as a detective, The Doctor Blake Mysteries as a guest role, Serangoon Road, Rake. He also acted in a documentary, Darwin's Brave New World as a lead character.

Socratis made is debut on the big screen from the movie, The Matrix Reloaded in 2003 that collected $742.1million at the box office. Later on, he acted in many more movies like- X-Men Origin: Wolverine, Beautiful, and The Rage in Placid Lake.

The most popular and appreciated the role played by Otto was the transgender named, Maxine Conway in Wentworth in 2014.

One of the best actors of Hollywood, Otto has an estimated net worth of $4million. But as per his lifestyle and posts, he is living a luxurious way of life.

Socratis Otto is single. There are no rumors about his dating and marriage records. He played the role of a transgender in a movie which raised questions about his sexual orientation. Many of the fans had assumed that he might be gay, but it is not sure.

Get To Know More: Clayne Crawford

Otto has prioritized his career rather than the relations. Socratis is popular among the audiences and is an active member of social media with many followers, 18.1k followers in twitter, 43.4k followers on Instagram.