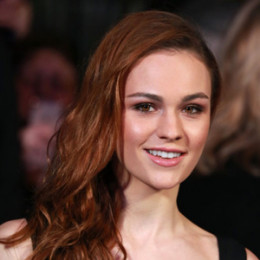 Sophie Skelton is a British actress who has made her appearance in the popular TV series and films like Casualty, The War I Knew and Outlander.

Sophie Skelton was born on March 7, 1994, in Woodland, U.K. She is the youngest child of her parents Simon and Ruth Skelton. Her parents are toy inventors. She grew up along with her brothers Sam and Roger.

Skelton completed her A-Levels in Biology, Chemistry, Literature, and Math. She used to be a ballet dancer when young.

Sophie Skelton made her appearance in the series DCI Banks in 2012. After that, she got an opportunity to cast in an array of TV series such as The Dumping Ground, Waterloo, Foyle’s War, So Awkward, Casualty, and Ren. Her film credit includes films like The War I Knew in 2014 and Blackbird in 2016.

Likewise, she also made her appearance on the second season finale of the BAFTA-winning Starz series Outlander alongside Richard Rankin’s portraying the role of Brianna.

The beautiful blonde Skelton is a single woman with no rumors of an alleged boyfriend. She was once rumored dating her Outlander co-star Richard Ranking after being seen hanging out together. The news turned out to be false as they are just good friends.

As an actress who has been cast in several popular films and TV series, Skelton probably earns a lucrative amount from her career. It is assumed that her net worth is possibly not less than a million.