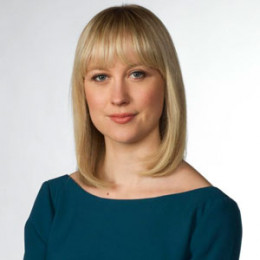 Sophy Arabella Ridge is an English broadcast journalist and Senior Political Correspondent for the Sky News. Sophy Ridge has owned the television media with her charming but bold personality as a political correspondent. She has been showered with several awards including Young Journalist of the Year in the Royal Television Society Awards, the Headline Money rising star award, the top rated female political blogger in Total Politics Blog Awards, etc. for her exceptional work in journalism.

Sophy Ridge, an English broadcaster was educated at the selective grammar Tiffin Girl’s School and St. Edmund Hall, Oxford where she studied English Literature. There is not much information on her family or her sibling. She belongs to white ethnicity and holds English nationality.

Sophy began her career as a trainee reporter for the tabloid newspaper News of the World after her graduation in 2006 where she worked as a consumer affairs correspondent at the beginning. Later she was promoted as a political correspondent.

She worked as a journalist on the sky news on 2011. Her work was highly appreciated as she was made to travel a lot and report a huge amount of political stories from across the world. She also visited places like Afghanistan, New York, and Brazil with the Prime Minister. At present, Ridge is a host on her show Sophy Ridge on Sunday.

Her highest profile was in 2015 as she played a key role in the 2015 general election coverage for Sky, reporting on the Labour Party's campaign and conducting interviews with party members.

Sophy is believed to be a married woman. Though Sophy has kept her personal life quiet secretive, she let out the fact of her marriage through social networking site on several occasions. She never reveals detail on her husband and her life. Well, the couple has no children till now, and no rumors about their divorce have been out yet. So it possible that the lovebirds are probably living a happily married life.

Sophy has her own show and is also a Senior News Correspondent for a reputed channel like Sky. She is also a winner of several awards one of them is the Headline money rising star award. All the success has probably increased her net worth, and it may be around six digits.