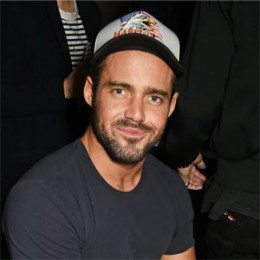 Spencer Matthews is a multi-talented personality who is actively involved in television, writing books and social work. However, he is best known for his appearance on the British reality series like; "Made in Chelsea," "I'm a Celebrity...Get Me Out of Here!", "The Bachelor and The Jump." Matthews is in a romantic relationship with his Irish model girlfriend, Vogue Williams.

Spencer Matthews was born as Spencer George Matthews on August 6, 1988, in London, England to David Matthews and Jane Spencer Parker. His father is the landowner and entrepreneur whereas his mother is an artist.

He was named after his maternal grandfather, Robert Spencer Parker, an architect. Matthews has two older brothers; James and Michael and one older half-sister, Nina.

Matthews joined the Eton College. Later he attended the University of Southern California and studied Cinema and Television. However, he dropped out after nine months of involvement.

Spencer Matthews began his career as a public relations manager. Later, he worked as a foreign exchange trader at Icap currency brokers. He came into the spotlight after his appearance in E4 constructed reality show Made in Chelsea. The show helped him to win millions of hearts.

He is also known as the author as he published his autobiography, Confessions of a Chelsea Boy in 2013. In 2017, he won the fourth series of the Channel 4 reality series The Jump.

Spencer Matthews, 29, is in a romantic relationship with his long-time girlfriend, Vogue Williams, she is an Irish Model. The duo shares a great equation with one another. He is the brother-in-law of Pippa Middleton. Previously, he was linked up with several women.

Matthews has earned a decent amount form his career, and as of now, he has an estimated net worth of £2.9 million.