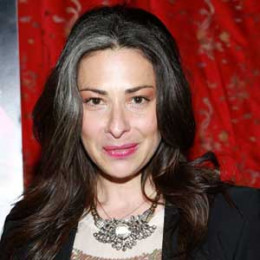 Stacy London an American stylist/fashion consultant, author, and magazine editor known primarily for her time as co-host on What Not to Wear, a reality television program that featured wardrobe and appearance makeovers. She began her career at Vogue magazine as a fashion assistant

Stacy London was born on 25 May 1969 in New York City, New York, to father Herbert London, the president emeritus of Hudson Institute and mother  Joy London, who worked as a Venture Capitalist.

London attended Vassar College. She doubled majored in 20th-Centuary Philosophy and German Literature and also a member of Paris in Christian Dior's P.R department, and it is when she took a serious interest in pursuing a career in the fashion industry.

London started her career as a fashion assistant at Vogue magazine and became the senior fashion editor at Mademoiselle. She styled fashion photos for other publications, including Italian D, Nylon, and Contents and also for celebrities such as Kate Winslet and Liv Tyler, on fashion shows for designers Rebecca Taylor, and Ghost. She worked on numerous advertising campaign too.

Stacy co-host TLC's "What Not to Wear" in 2003. In 2005, She wrote a book titled "Dress Your Best" along with host Clinton Kelly. In 2008, London served as a host of her talk show Shut up! It's Stacy London", which was the pilot episode for Fashionably Late with Stacy London. She had done fashion reporting for Weekend Today, The Early Show, Good Day Live and Access Hollywood. She was Creative Director for West field style and editor-in-chief of Westfield STYLE magazine.

From 2009 to 2010, she was a spokesperson for Pantene, Woolite, Dr.Scholl's, and Riders by Lee. London. With her business partner, Cindy McLaughlin co-founded Style for Hire- an online service that matches people with personal stylists that live in their area.

In February 2013. Stacy became an Editor-at-large of Shape Magazine, as a fashion columnist.  Alongside, she also hosted the TLC's Love, Lust or Run, which was also the similar work like, "What Not to Wear."

Her personal life has been the matter of curiosity for a long time. Well, to talk about her personal life the 48-years-old Stylist/Fashion Consultant is currently single.

Moreover, the fashion stylist has also so far not been rumored to have indulged in any relationship and affairs. Not even her past relationship is open to the media.