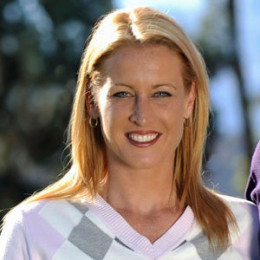 Stephanie Sparks is an on-air personality at The Golf Channel and a former golfer, whose best years in golf came as an amateur. She played golf at Duke University and joined the Futures Tour, the LPGA's developmental tour. Sparks' first time in front of a camera for The Golf Channel took place in July 2004, when she began hosting Golf With Style! Sparks also anchors short Golf Central updates on Thursdays and Fridays to tell viewers what's going on in the early part of a round at a golf tournament.

Stephanie Sparks was born on July 18, 1973, in Wheeling, West Virginia. There is no information on her parents and childhood. Sparks graduated from Duke University where she played golf and became an All-American.

Stephanie Sparks joined Future Tours after her graduation. Eventually, in 1999, she got her LPGA card at Q-school. However, her career was cut short when she was forced to retire in 2000 because of her back surgery.

After her retirement, Sparks started working at the Golf Channel as a production assistant in the cable television network’s original production departments. In 2004, Stephanie made her first movie appearance in the film Bobby Jones: A stroke of Genius. Meanwhile, she is best known for hosting The Big Break.

Stephanie Sparks is considered to be a very secretive person. She has not shared her personal information out to the public. Moreover, she is yet to provide clarity on whether she is married or divorced or single or dating anyone currently or if she has any children from her affairs with her boyfriend.

Nothing is revealed about the personal life of Sparks which has successfully kept her out of gossips and links. Romantic life of this talented lady is a complete mystery. Meanwhile, she appears very concerned about her personality and looks.

Stephanie takes care of her diet and performs yoga to maintain balance mentally as well as physically. She stands the height of 5 feet and 5 inches with an attractive body posture.

Stephanie Sparks has an estimated net worth of $100,000. Her source of income includes her salary and earnings from her career as a golfer and on-air personality.