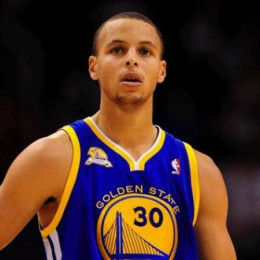 Wardell Stephen Curry II is a professional basketball player, currently playing for the Golden State Warriors in the point guard position, of the National Basketball Association. As a member of the USA men's national basketball team, he won two gold medals. In 2007, he became a silver medalist with the Under-19 USA team and the NBA Most Valuable Player of 2015. He was born to Dell Curry, a former NBA player and Sonya, a teacher.

Talking about his personal life, he is a married man. He married his college sweetheart with whom he has fathered a lovely daughter. The couple is expecting their second child. They both are happy and are truly loyal towards each other so there is no point on their divorce. Till now there is no any records of his past affairs and other such relevant activities.

She is an actress and model by profession. The couple got engaged in 2009 while Curry was attending Davidson College. She is an expecting her second child at the moment.

She is the first child born to Curry and his wife. Her pictures can be viewed easily on the internet.