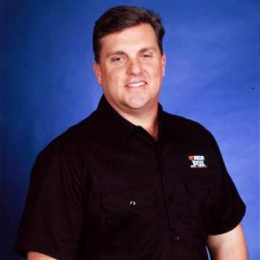 Steven Patrick Byrnes, better known as 'Steve Byrnes', was an American television announcer and producer who began his career as a sports producer, covering several NFL teams. In the year 1985, he started getting involved with auto racing, most prominently NASCAR and in 2001, he began working with Fox NASCAR as a pit reporter, and later became the host of Speed/Fox Sports 1's studio show NASCAR Race Hub.

Accounting his personal life, he was a married man. His wife is the founder of Marketing Performance Group, that provides public relations, hospitality and marketing in NASCAR circuits. He never divorced his wife as the two were perfectly made for each other and were happy with each other's presence. He died on April 21, 2015 at the age of 56 in Fort Mill, South Carolina due to head and neck cancer.

She is the one and only beloved wife of Steven, whom he married in the year 1993. The couple have raised a son from their marriage.

He is the only child of Steve, who was born safe and sound.