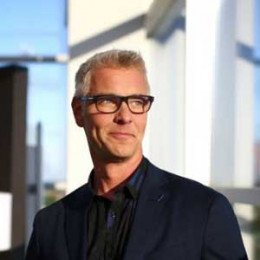 Steven Sabados is a Canadian TV personality, designer, writer and host too. He used to appear in TV shows with his life partner Chris Hyndman. But after his death, Steven so far stopped such shows. Steven is openly a gay and hence got married to Chris. He is now single after the death of his husband. Steven along with Chris contributes a lot to the entertainment and style industry.

Steven was born and raised in Niagara Falls, Ontario. In 1986, he graduated from Fanshawe College in Ontario, London with a degree of fine art.

After his graduation, he moved to Toronto and became display director for Roots Canada and Eatons. And in 1992, Steven Sabados and his partner, Chris Hyndman formed a designed firm, Sabados Group. Later on, they together pioneer the show, Design Television.

Both the guys debuted from a Canadian design show on HGTV Canada named, Designer Guys for first three seasons in 2001. Moreover, in 2003, Steven and Chris again were in the shows, Design Revivals and So Chic with Steven and Chris ( a makeover show). From 2008-2015, steven along with Chris hosted the talk show named, Steven and Chris.

After the death of Chris, Steven also left the show in 2015. Then Steven appeared as a guest on various television shows and magazines too. As per one of the interviews in 2016, Steven announced to co-host in a program with Jessi Cruickshank and other. Steven was nominated for Best Host in a Lifestyle by Gemini Award.

Steven Sabados is a gay and got married to his all time partner, Chris Hyndman in 2008. During 1988, they were having an on-screen chemistry and were not opened up to the media about their relationship.

On 3rd August 2015, Chris was found dead in an alleyway near his house in Toronto. As per the statement of Chris's mother, he might be dead because of his sleep walk problem. As a tribute to Chris, Steven developed a new productive team to uplift their firm. The team is tiring to make more stylish and affordable product to raise their brand.

Chris Hyndman and Steven Sabados got married in 2008. Chris was found dead on 3rd August 2015 near his home in Toronto. As per the statement of Chris's mother, he might have died because of his sleepwalking problem.