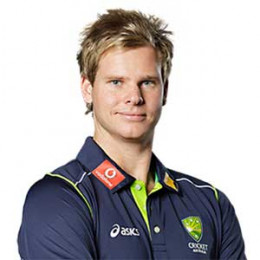 Steve Smith is an Australian cricket player and represents Australia in all the formats of cricket. He is also the former captain of Australian Cricket team.Apart from representing Australia in the international cricket he also plays for New South Wales and Sydney Sixers at the domestic level.

He attended Menai High School, but at the age of 17, he dropped out from his school, Higher School Certificate(HSC) to play cricket in England. He played his junior cricket with IIlawong Cricket Club, where he played 11 seasons with the club.

Smith made his first debut against Western Australia at the SCG on 24 January 2008. At the end of 2009, he had a first class batting average of over 50 after just 13 first class matches in 10 domestic season. In the final game of that season, he took 7 for 64 in the second innings against South Australia.

Steve Smith made his international Cricket debut in T20 international match against Pakistan at Melbourne in February 2010. The same month, he made his one-day international debut against the West Indies in Melbourne, playing in the fifth match of the series.

In 2010 Smith was first bought by Royal Challengers Banglore as a replacement for Jesse Ryder in Indian Premier League. In 2011 IPL auction, Smith was brought by Kochi Tuskers Kerala but had to undergo an ankle surgery and wasn't able to play the match for the club that season.

Steve Smith is currently in a happy relationship with his long-term girlfriend, Danielle Willis. Danielle is a commerce student, currently attending Macquarie University.
They have been seeing each other since 2011 and are still going very strong.  There haven't been any rumors of the couple getting engaged, so getting married is very low on their agenda right now. They are currently focusing on their careers and are happy with their relationship right now. They are both young, and marriage can wait.