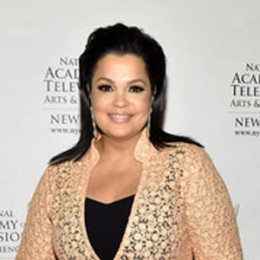 Sukanya Krishnan is an Indian born American news anchor currently works for the PIX Morning news on WPIX. From her career, the star is making a good net worth. When it comes to her personal life, she is married and is the mother of two children.

Sukanya Krishnan is a married woman. She married her husband is Eric Schroeder on September 17, 2007, which she declared in the CW11 Morning News.

The couple moreover has two children; son named Kiran and daughter Shyla Alexy. She has also declared her advanced stage of pregnancy on Amid the show. Krishnan wanted to give an Indian name to her child so the infant was given a name Kiran. She reported excepting her second child at the PIX 11 Morning news show.

Sukanya Krishnan has the net worth of $1 million. The star makes the fortune from her anchoring career.

Sukanya Krishnan was born on 2nd August 1971 in Chennai, India. She holds both American and Indian nationalities.

Krishnan moreover graduated from Dickinson College with a bachelors degree in Spanish. Besides, Sukanya started her career as a morning/noon anchor for WHP-Tv, where she was noted for covering various stories like the floods of 1996 in Pennsylvania, TWA Flight 800 and the Million Man March.

Coming together is the beginning; working together in a fearless and formidable way every morning is success. Thank you all for supporting and watching this team throughout the year. We are so grateful to have you as part of our mornings. #cantdoitalone #livingmybestlife #thankyouforbeingafriend #2019 #christmas2018. #countdowntochristmas

After this, she joined WCNS-TV where she worked as a general assignment reporter. She then joined popular ABC's affiliated network WUTR-TV. Then she went working at anchoring and reporting jobs in a few stations and networks. She covered everything including the Clinton White House impeachment proceeding, the Mayor Rudolph Giuliani's cleanup of Time Square, the Abner Louima beating and the 1998 race between Mark McGwire and Sammy Saso.

Krishnan has also won awards such as Emmy Award, Indian's Project Creating a Voice award and was named one of the Power Women in 2007 by New York Moves Magazine.

Sukanya Krishnan married her long-term boyfriend Eric Schroeder on September 17, 2007; which she declared on the CW11 Morning News. Schroeder works in FDNY. They have two children