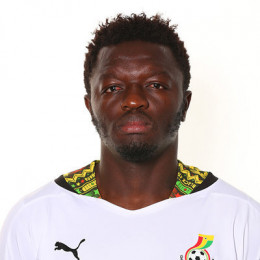 A Ghanaian Professional international football player who plays for Ghana national team and Associazione Calcio Milan commonly known as A.C. Milan as a central midfielder. When he was child his dream was to play for Manchester United. At the young age of 16 he became a regular member of Ghana U-20 team. He started his youth career by playing for Liberty Professionals youth team.

He is happily married with his longtime girlfriend who is occupationally a businesswoman. The couple has not given birth to any children. Since he is considered as confidential and shy player, he has not disclosed other information about his personal life. Once he became matter of discussion to his fans when he was suspended from Ghana national team squad on 26 June 2014 for some disciplinary reason.

He started dating her when he was young. Professionally she is Ghanaian business woman. Their picture can be found in internet.