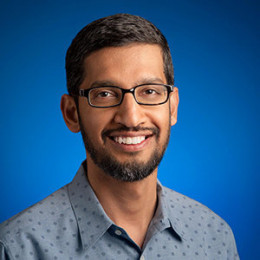 Sundar Pichai, an Indian-American business executive and businessperson, is currently married to Anjali Pichai. He was born to father Raghunath Pichai, an electrical engineer and mother Lakshmi, a stenographer. Sundar completed his Master's in Material science and Engineering from Stanford University and later completed MBA from the Wharton School at the University of Pennsylvania. After his MBA, he was hired by "McKinnsey and Company" in New York as a management consultant.

Sundar Pichai joined Google in 2004 and worked on popular products. He was announced as the new CEO of Google in 2015. Sundar got married to Anjali Pichai, a Chemical Engineer, and a same-year classmate at IIT Kharagpur. They have two children and live together in Los Altos Hills. He has never faced any rumor or controversy in his life, neither he has been part of any divorce issues.

Sundar Pichai got married to Anjali, whom he met during the days at IIT. The couple has been blessed with two children.