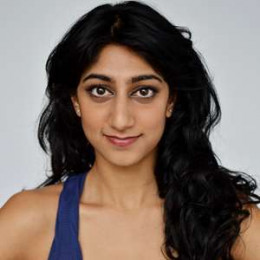 Sunita Mani is a dancer, model, and stand-up comedian. She is popular from the television series named Mr.Robert, she has a role of Trenton in this series. She makes an impressive amount from her career.

Sunita Mani is a married woman. She tied the knot on 26th May 2018 with her boyfriend turned husband Kenny Warren in an Indian wedding ceremony.

It’s been one week as husband and wife. I continue to be struck by overwhelming waves of gratitude, love, and the sheer facts of how this wedding came to be. From all the people who support and affirm us, I am empty and full from this celebration. I can’t contain the emotion behind this feat called a wedding. We couldn’t have done it without our friends and family! And me, especially not without my confidant til the end, Kenny Warren. More photos to come by the incredibly lovely @nicolahargerwed

The star gained public recognition by her dance performance in a music video of the song “Turn Down for What” which was released in December 2013.  Apart, she is active on social media including Instagram.

Sunita Mani has the net worth of not less than $500 Thousand. Her major source of income is her dancing and acting career.

Mani moreover acts in the drama –thriller television series named Mr.Robert in the role of Trenton. She is a member of the dance group named Cocoon Central Dance Team.

Sunita Mani was born in 1983 in Dickson, Tennessee. She holds both American and Indian nationalities.

Mani besides attended Emerson College in Boston, MA where she received a Bachelor of Fine Arts degree in writing, literature, and publishing. She began her career as an actress in Writer’s Block it's an MTV web TV pilot.