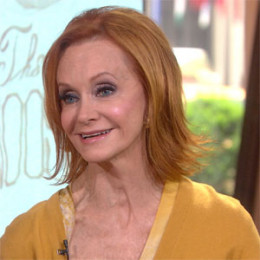 Emmy Award-winning actress, Swoosie Kurtz is an American actress. She was cast in a number of movies and television series including, Sisters, Mike & Molly, Pushing Daisies, The World According to Garp and many more.

Swoosie Kurtz was born on September 6, 1944, in Omaha, Nebraska, U.S. She belongs to White-American ethnicity/race and holds American nationality.

Kurtz is the only child of her parents, Frank Kurtz, a colonel in the U.S. Air Force and Margo Kurtz, an author. Her father gave her first name "Swoosie."

Kurtz majored in drama from the University of Southern California. Later, she went to the London Academy of Music and Dramatic Art for her further studies.

Swoosie Kurtz began her career in 1962 with an American situation comedy, The Donna Reed Show as Mimi. The same year along with her father, she appeared on the game show, To Tell the Truth.

Kurtz made her first movie appearance in 1977 comedy film, Slap Shot as Shirley Upton in 1977. She also starred as Marsha in the movie, First Love. After being cast in the movie, Uncommon Women, she came into limelight and also won a Drama Desk Award.

From 1991 to 1996, Kurtz starred in an American drama series, Sisters, and was nominated for two Emmy Awards. In 2017, she appeared in three episodes of the TV series, Man with a Plan as Beverly Burns.

73 years old, Swoosie Kurtz is not married yet. She keeps her personal details under shade. Therefore, the actual reason behind not getting married has not been disclosed yet.

She dated an American actor, Brent Spiner in 1987. Besides, there are no any records of her other relationships and has not involved in any controversy.

Since long, Swoosie Kurtz is active in the field of acting and has featured in some movies and television series. She earns a decent amount of salary, but her official net worth has not been disclosed yet.

Kurtz also has Audi A3 car which has a market value $31,950 - $54,900 MSRP. Considering her assets, she might have an estimated net worth of millions of dollars.