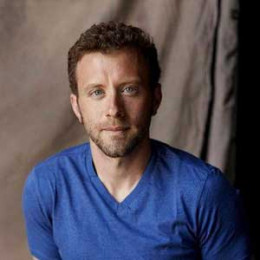 An American actor T.J. Thyne is popular for his role on thriller Bones of Fox Show portraying the character Dr. Jack Hodgins, an entomologist. He is a skilled actor who has made a name in the film industry with his incredible performance.

T. J. Thyne was born Thomas Joseph Thyne on 7th March 1975. He is the son of John J. Thyne II and Catherine Thyne. Thomas grew up with his siblings namely, John III, Tone, Hazel, Katie and Shelly in Boston, Massachusetts. His brother Tone is a television producer whereas John is an attorney who ran for the Santa Barbara City Council in 2009.

Thomas began his career in 1998 debuting in an episode Home Improvement in Dharma and Greg followed by Friends. After that, he worked in many show business including Kenan and Kel, Walker, Texas Ranger, My Wife and Kids, CSI: Crime Scene Investigation and many others.

In 1999 Thomas starred in an American satirical comedy film EDtv. In 2001, he co-founded a group 'Theatre Junkies' so as to help aspiring actors in and around Los Angeles.

Later Thyne got an opportunity to play the main role in the popular series of Fox Show ‘Bones’ alongside Emily Deschanel, David Boreanaz and Michaela Conlin in 2005. Then he made an appearance in short film Validation and The Pardon. He received acclaim for his role in One Dry Run.

The duo was dating since 2010. The husband and wife are blessed with a child.

The talented and industrious actor Thyne earns a good sum of money from his profession. He has accumulated an estimated net worth of $ 10 million. Hence it’s a certain fact that he lives a lavish and comfortable life.