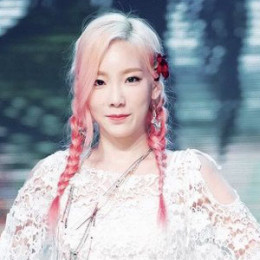 Taeyeon is a famous South Korean bonafide singer and actress widely known as a member of the group Girls' Generation, its subgroup TTS, and SM the Ballad. Aside from group activities, she has also recorded songs for various television dramas and movies. For her powerful vocals, she was awarded Best Female Artist at the Mnet Asian Music Award.

Kim Tae-yeon now famous as Taeyeon was born on March 9, 1989, in Jeonju, North Jeolla, South Korea. He holds Korean nationality and belongs to Asian ethnicity. She was raised along with her two siblings an older brother, Kim Jiwoong, and a sister, Kim Haeyeon by her parents. Her dad was a vocalist in a band, and mom had won children's song competitions when she was young.

Since her childhood, she was eager to pursue a career in music, and while in middle school, she began taking vocal lessons and later in 2007, she enrolled as a trainee at S.M. Entertainment's Starlight Academy. Taeyeon also attended Jeonju Art High School, aspiring to become a famous singer.

Taeyeon after winning a talent competition became a member of SM's all-female pop group Girls' Generation in 2007. In 2009, the group released the song "Gee" and became famous in South Korea, that led to the expansion of their fan following. The group developed a strong fan base even in Japan and the United States. As their popularity rose, Taeyeon was increasingly seen as their key member and subsequently after that appeared on several television specials and stage presentations.

Taeyeon began her solo career in 2015 with her first extended play, I which became one of the year's top-selling releases. After a year she released second extended play, Why (2016), charted at number one on the Gaon Album Chart. She was awarded Best Female Artist at the Mnet Asian Music Awards and ranked as the most popular idol of South Korea. Taeyeon was listed among the top 40 powerful celebrities and best female vocalist of the year.

Gorgeous actor and singer Taeyeon is currently single. She was in love relation with Byun BaekHyun, a member of a boy band Exo. The pair started dating since February 2014, but the pair eventually parted ways on September 15, 2015. The reason behind their breakup was their busy schedules.

After separating with Byun BaekHyun, she has never been seen in public with another guy. Moreover, there were some rumors, about the singer dating G-dragon, but it was confirmed to be false.

Taeyeon is an established singer of current time and earns good some of the money from her musicals.

Taeyeon is very satisfied with her career and living a luxurious life. As of 2017, her current estimated net worth is around $8 million.