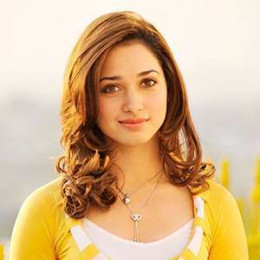 Telugu and Tamil actress, Tamannaah Bhatia is the daughter of Santosh Bhatia, a diamond merchant, and Rajani Bhatia. She made her acting debut in 2005 with Hindi film named 'Chand Sa Roshan Chehra' (2005). In 2006, Tamannaah appeared in first Tamil film, Kedi (2006). In 2007, she starred in two films, Happy Days (2007) and Kalloori (2007), which earned her critical acclaim.

Bhatia's popular Tamil movie named 'Paiyaa' was profitable at the box office, for which she was nominated for Best Actress Tamil at the 58th Filmfare Awards South ceremony.In 2010, Tamannaah played the female lead in three Tamil films including Paiyaa, Sura, and Thillalangadi.