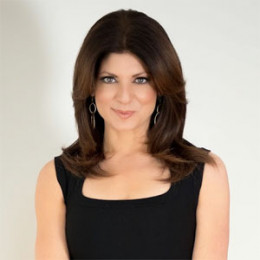 Tamsen Fadal is a Lebanese-American television journalist, author, and 8-time Emmy award-winning news anchor. She is the executive producer and host of the nationality syndicated show, Broadway Profiles. Fadal is the author of three books, the most recent The New Single was published by St. Martin’s Press.

She has been an advocate in the fight against breast cancer with Avon39 working alongside several New York City breast cancer charities after having lost her mother to the disease when she was 20 years old.

Fadal began her broadcasting career as a morning anchor for WHNZ Radio in Tampa, Florida shortly after graduating from the University of South Florida in 1992 with a Bachelor of Arts degree in journalism. In 2002, she traveled to Afghanistan with the American troops reporting on the war.

In 2014, she as awarded with the Broadcast Journalist Award for her outstanding work in the field of Journalism by National Air Disaster Foundation.

Talking about her marital status, she was married and got a divorce. In 2007, She was married to Matt Titus, who was a match-maker, author, and public speaker. They were married for a long time but due to some internal reasons they later got divorced in 2012.