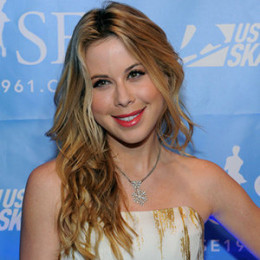 Tara Lipinski is an retired American figure skater, sports commentator and an actress.With white ethnicity Tara was the only daughter of Jack Richard Lipinski and Patricia Lipinski. Her father was a lawyer and an oil executive and her mother was a secretary. She spent her childhood in Washington Township, Gloucester County, New Jersey. At the age of 3 ,Tara started skating and at 6 she began ice skating. In 1997 she won US national championship and was the youngest player to win the title. Again in 1998, she won Olympic gold medal being the youngest one to do so. She has also appeared in several shows as a guest including Touched by an Angel, Sabrina, Malcolm in the Middle, Veronica's Closet and much more.

Tara Lipinski is engaged to her long-term boyfriend Fox sports producer in 20th December , 2015 at Mr. C Beverly Hills. They had been dating since 2009 and have no child as they are just engaged Tara is not married yet hope she is to marry her fiancee .

Tara had many rumors about her dating life. According to some sources, Dax Shepard was the one Tara dated in 2007.