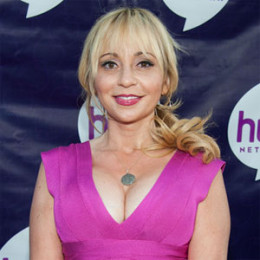 Canadian–American actress, Tara Strong is the daughter of Syd, a pharmacist and Lucy Charendoff. In 2004, she won an Interactive Achievement Award for her role as Rikku in Final Fantasy X-2. Strong has voiced many animated characters, including 'Fillmore!' as Ingrid Third; 'The Fairly OddParents' as Timmy Turner and 'Poof; Rugrats' and 'All Grown Up!' as Dil Pickles.

The beautiful and popular voice actress Tara Charendoff strong was born in Toronto, Canada on February 12, 1973. Her family was immigrated to Canada after escaping the ‘Russian pogroms’ and ran a candy and novelty store there. She and her elder sister ‘Marla’ were raised in Toronto.

Tara started acting and performing since the age of 4 years old. She performed and volunteered functions in school days. She worked in the Yiddish theater too, though she didn’t know the Yiddish language, she memorized her lines perfectly.

She performed in ‘Toronto Jewish Theater’ where she acted in a drama named ‘A night of stars’ as well as she sang the songs with ‘Habonim Youth Choir’ in both English and Hebrew. She joined the improve classes at ‘The Second City’ in Toronto before moving to Los Angeles in January 1994.

At the age of 13-year-old Tara Strong got her first professional role of ‘Gracie’ in theater drama ‘the Music Man’. She started her voice acting career through the ‘Hello Kitty’s Furry Tale Theater’. She appeared in the CBC Television sitcom ‘Mosquito Lake’.

After that, beautiful Tara Strong lent her voice over numbers of animated series, movies, and video games. Many of her major voice roles include animated series such as ‘Rugrats’, ‘The Power Puff Girls’, ‘The Fairy Odd Parents’, ‘Teen Titans’. She voiced Mary Jane Watson in Ultimate Spider-Man and Twilight Sparkle in My Little Pony: Friendship Is Magic.

She played live roles in ‘The Last White Dishwasher’, ‘Sabrina Goes to Rome’. Tara made her guest appearance in many shows including ‘Forever Knight’, ‘Street Legal’, ‘3rd Rock from the Sun’ etc. In January 2013, she voiced the character Plum ‘Bravest Warriors’.

Tara Strong won her first ‘Interactive Achievement Award’ in 2004 for her role as ‘Rikku’ in ‘Final Fantasy X-2’. She has been nominated five times for ‘Annie Awards’ and a single time in ‘Daytime Emmy Awards’. In 2013, she won the Shorty Award for ‘Best #Actress’ for being subsequently active in social media.

In 2013, she has been chosen as the best voice actress by ‘Behind the Voice Actress’ website. She was featured on the front cover of ‘Working Mother’ magazine for July/August 2004 issue.

Tara met her now-husband for the first time in 1999 after a year of dating she tied a knot with Craig strong (Former American actor-turned real estate agent) on May 14, 2000. The duo was blessed with two sons named Sammy (2002) and Aden (2004).

Tara moved to Los Angeles with her family and started their internet based company ‘VoiceStarz’ that teaches people how to get into the voice-over business. She was involved with ‘Bronies for Good’ (charity group) where she helped a family whose daughter had a brain tumor through raising funds.

Strong was the roommate of the actress ‘Neve Campbell’. In 1990 both of them auditioned for the same role of Julia for TV series ‘Party of Five’ where Campbell won the role but it doesn’t affect their friendship. Tara was also appeared in the show as ‘Lorna’.

The 44-years-old Tara has a height of 5ft 3 inches tall who has an estimated net worth of $10 million. Besides acting she was involved in a business with her husband.

In Los Angeles, they have their own internet based company ‘VoiceStarz’ that teaches people how to get into the voice-over business as well as they have a business of baby bottles.