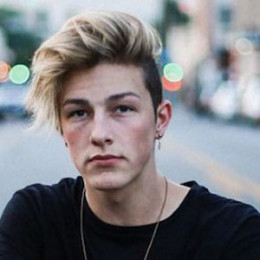 Tayler was born on August 19, 1997, originally from Texas but was raised in Los Angeles. He knew excatly what he wanted to do at a very early age. He rose to fame through the app musical.ly in which he has more than 1.2 million fans.

The best described as a rising social media personality Tayler Holder was born on August 19, 1997, in the U.DS.

He rose to fame quickly through the musical.ly app. He has earned more than 1.2 million fans on his itstaylerholder account. He belongs to white ethnicity and holds an American nationality.

The 19-year-old Holder raised in Texas with his parents, and later he moved to Los Angeles, California to pursue his career.

He attended high school in his birthplace. He knew what he wanted from his life at a very early age. He wanted to make it huge in the entertainment world, and now he has done what he wanted.

Tayler Holder collaborated with his friend, Joseph Birlem to come up and make a YouTube channel called, “Joey and Tayler”. In 2014, he hit off with his YouNow and an Instagram account which nowadays has more than 33.1K and 505K followers respectively.

Holder's big breakthrough came with Musical.ly, a social media app that gave him an edge beyond all the rest. He began sharing interesting videos, he earned the hearts of thousands of viewers and nowadays more than 860K people are following him on Musical.ly alone.

In 2016, Holder posted “CONDOM CHALLENGE (Our Version)” video, which gained more than 313,903 views till March 2017. Besides this, he also has a clothing line called “Tayler Holder March”, where his fans get t-shirts, outwears, hoodies, posters and much more.

The young and handsome Tayler is an unmarried and still single. There are no rumors about his relationships yet. He is one of those guys who is blessed with a very attractive personality which can make any girl go crazy for him.

However, it looks like is not looking for any commitment right now and seems to be more focused on his career.

Tayler has an estimated net worth of million dollars which he mainly earned through uploading videos on YouTube and his clothing line.

He uploads videos frequently, and on average those videos get around a million views which earn him around a million dollars annually. Apart from that, he sells merchandise to his fans as well.