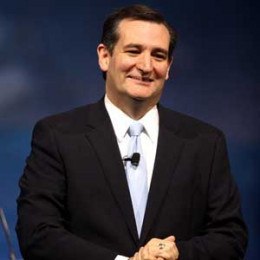 An American politician and attorney Ted Cruz was the Republican candidate for President of United States in 2016. He also served as a senator in Texas. Ted first gained national prominence in 2013 to shut down the federal government over the fight with Barack Obama over the health care reformed law. He is a married man living with his wife, Heidi Nelson and his two daughters- Caroline and Catherine.

Born on 22nd December 1970 at Foothills General Hospital in Calgary, Alberta, Ted is a son of mother, Eleanor Elizabeth Wilson, and father, Rafael Bienvenido Cruz y Diaz. His mother comes from mixed descent- Irish and Italian whereas his father is a Canadian.

In 1973 Ted earned Canadian citizenship and became an American citizen in 2005. He was raised in a middle-class family along with his two half-sisters- Miriam Ceferina Cruz and Roxana Lourdes Cruz, from his father's first marriage. In 2011 Ted's half sisters, Mariam died.

Cruz finished his primary and high school from Faith West Academy, Texas and Second Baptist High School, Houston and in 1988 graduated as valedictorian, an academic title. During his schooling, he participated in a program where students were taught about the philosophies of the economists.

Moreover, Ted continued his study at Harvard Law School and earned a degree too. He then worked as a law clerk for several judges.

Ted started private practicing and took a position from 1997-1998 with Cooper, Carvin, and Rosenthal. He used to work for National Rifle Association that prepared a statement for the accusation proceeding against the former president, Bill Clinton and became one of the attorneys to represent the Congressman, John Boehner.

Moreover, in 1999 he joined the George W. Bush presidential campaign and supported him legally to take him to the position of president. After Bush had become president, Ted worked as an associated deputy attorney general in US Justice Department.

From 2003-2008, he served as a Solicitor General of Texas. After that, he joined a private law firm named, Morgan, Lewis & Bockius LLP. The firm always represented the corporate clients.

In 2013 Ted made a name for himself with his tactics and speeches. Ted worked really hard to shut down the government after 21-hour speech against President Barack Obama's healthcare plan.

In 2014, Cruz projected legislation to avoid President Obama from growing amnesty, and he was a vocal critic of the Obama administration’s immigration policies.

In 2015, he announced himself as a president's candidate via Twitter. In 2016 he was close to the victory in his pursuit to the presidency but lost.

Ted Cruz met his wife, Heidi Nelson while working for the George W. Bush presidential campaign, 2000. Later on, in 2001 they got married and currently have two daughters- Caroline and Catherine.

His spouse, Heidi was the head of the Southwest Region in the Investment Management Division of Goldman, Sachs & Co. and resigned in 2016. The family is living a ravishing high profile life together.

Ted has an estimated net worth of $3.5 million. He owns a house in Houston, Texas where he lives with his family.

In 2001 Ted Cruz and Heidi Nelson got married and currently have two daughters- Caroline and Catherine. His spouse, Heidi was the head of the Southwest Region in the Investment Management Division of Goldman, Sachs & Co. and resigned in 2016.

Caroline Cruz is the first daughter of Ted Cruz and Heidi Nelson. She was born on 14th April 2008.

Catherine Christian Cruz is the youngest daughter of Ted Cruz and Heidi Cruze who was born in 2011.