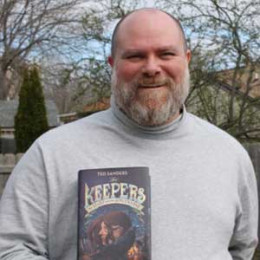 An American author, Ted Sanders is best known for his books including- No Animals We Could Names, Obit, The Keepers and so on. The Bakeless Prize winner, Ted also received a Literature Fellowship from the National Endowment for the Arts in 2012. He is mainly famous for the collection of short stories. Ted is also a teacher at the University of Illinois, the University from where he graduated.

Ted was born in 1969 in the United States. He is an American citizen and of white ethnicity. In 2007 Ted earned a degree of MFA ( Master of Fine Arts) in Creative Writing from University of Illinois, Urbana- Champaign. In the same college, he taught creative writing to the students.

Ted Sanders was interested in writing from his early age and also graduated from the related subject. He wrote a short story named, Obit which won O. Henry Prize Stories anthology, an American award given for the short- stories of exceptional merit in 2010.

Moreover, he also wrote the collection of short stories including- No Aminals We Could Names which also won Bakeless Prize in 2011. Ted was also an author of The Keepers, a fantasy series for middle-grade readers. In 2015, he published a book named, The Box and the Dragonfly and The Harp and the Ravenvine in 2016.

Sanders kept his personal life confidential. He has become of age and most probably is a married man however until he reveals about his relationship status nothing can be guaranteed.

Other men of the same age are married and have children too.

The net worth of Ted has not been revealed to the public yet. He has also kept his income secret and has not revealed yet. Ted's books are the primary source of his income.