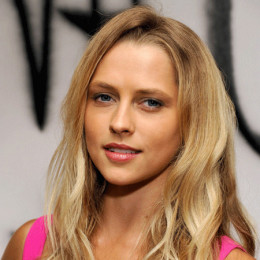 An Australian actress and model who is widely famous for her role in sci-fi action film, I am Number Four, and the Disney film, Bedtime Stories. She is daughter to Kevin Palmer and Paula Sanders. When she was just three years old her parents got divorced. She attended Mercedes College, a private Catholic day school. When she was just 18 years old she started her career in independent Australian movie 2:37 and her performance in 2006 she was awarded with Australian Film Institute Award for Best Lead Actress. She steeped in Hollywood by starring in a movie named Jumper. She has also starred in The Grudge 2, Take Me Home Tonight, December Boys etc. She is working for crime-drama heist film, Triple Nine which is going to be released in 2015.

Talking about her personal life, she had dated no. of celebrities including players and actors. About her current marital status, she got happily married to her longtime boyfriend. They got to know each other via Twitter. After a year of dating they got engaged and finally got married. Their marriage was performed in Mexico in presence of their family and friends. Together the couple is the proud parents of a son. She is also a step mother of her husband's son from his previous relationship.

After she tweeted that she was going to marry him in Twitter, shortly she married him in a ritual ceremony held in Mexico. Looking at the couple, it seems like they are made for each other. Together they are parents of two sons including one from his previous relationship.

He is very cute and gorgeous child. He weighed 8 lbs. when he was born.

He is her husband's son from his ex-wife.