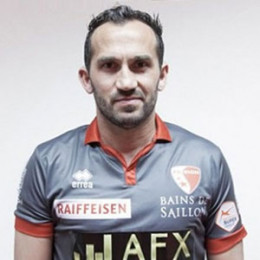 A Greek football player who mainly plays as striker for Akhisar Belediyespor in the Turkish Süper Lig. He is also one of the top goalscorer of Superleague Greece. He began his football career from the local club Larissa and played for it for three years. He is Greece's third highest all time goalscorer with 24 goals. There are no other information about his parents and his education.

He is very hardworking player and he has not involved himself in any kind of controversies that will hamper his career. Regarding his marital status, he is married with his longtime girlfriend. He and his wife has two children together. His children are twins and they were born shortly after the 2008 European Championships in which he took part from Greece national team.

They know each other from their adulthood. Their relation is running smoothly without any sign of conflict. Together they are parents of twins.