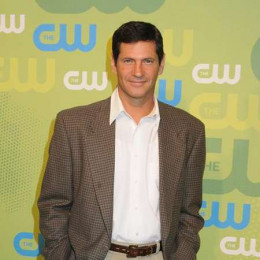 Thomas F. Calabro is an American actor and director, best known for his role of Dr. Michael Mancini on Melrose Place and as Jake and Puck's father in the the episode, Choke. He started his acting career in theatre with various roles in New York and his first role was in William Shakespeare's A Midsummer Night's Dream where he played as Oberon. He is a member of New York's Actor's Studio and Circle Repertory Lab.

Accounting his personal life, he is currently single as he divorced his gorgeous wife in the year 2006. He was married to his wife from the year 1993 till 2006 and together the couple have raised three children: two sons and a daughter. After the divorce he hasn't been in a relationship with anyone as he has devoted his time to raise his kids. Also there is no record of his past relationship history.

She is the ex-wife of Calabro, whose personal details are yet unknown to the media. They stayed as husband and wife for almost 13 years.

She is the first and only daughter born to Calabro.

He is the second child of Calabro, who was born in the year 1996.

He is the youngest member in the family, who is very well mannered and obedient.