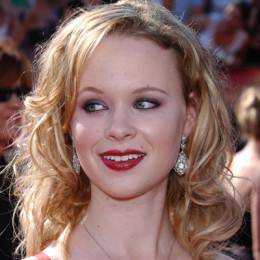 Thora Birch is an American actress known for her roles in films such as Hocus Pocus, Now and Then, Patriot Games, Monkey Trouble, All I Want for Christmas and Alaska, . She got her first role at the very little age of six in the short-lived sitcom Day by Day. She is of Italian, Scandinavian and German Jewish ancestry. She is the daughter of Jack Birch and Carol Connors. For the Best Young Actress aged under 9, she has received a Young Artist Award.

There is no much information about her personal life because she likes her privacy within herself and does not like other to know about it. She is not seen with someone who seems to be like her boyfriend so we can assume that she is yet single. But she is found saying that she has a huge crush on actor Joaquin Phoenix, but yet it is just a crush. She is overall concentrated mostly on her career and possession.