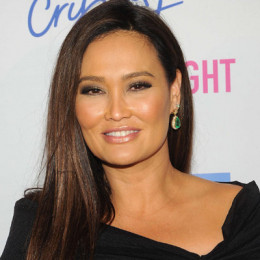 Tia Carrere is an American actress and model as well as a singer and a voice artist. She got her first big break on the daytime soap opera General Hospital. She is of Spanish, Hawaiian, Filipino and Chinese ancestry. She is the daughter of Audrey Duhinio Janairo, a computer supervisor and Alexander Janairo, a banker. She attended Sacred Hearts Academy, an all girls school.

She is a two time Grammy Award winner. She was first married to a film producer.They were good in their relation but her husband accused her for extra affair with a married man so they got separated. After that she again got hooked up with a British guy. They got married and have a daughter together. But they had some trouble in their relation so they filed for divorce and got separated.

He is a film producer. The couple lived together for a long time and then got separated.

He is a photojournalist. The couple together have a baby as a sign of their love.

She was born in LosAngeles, California. After her parents divorce, they are sharing custody of her.